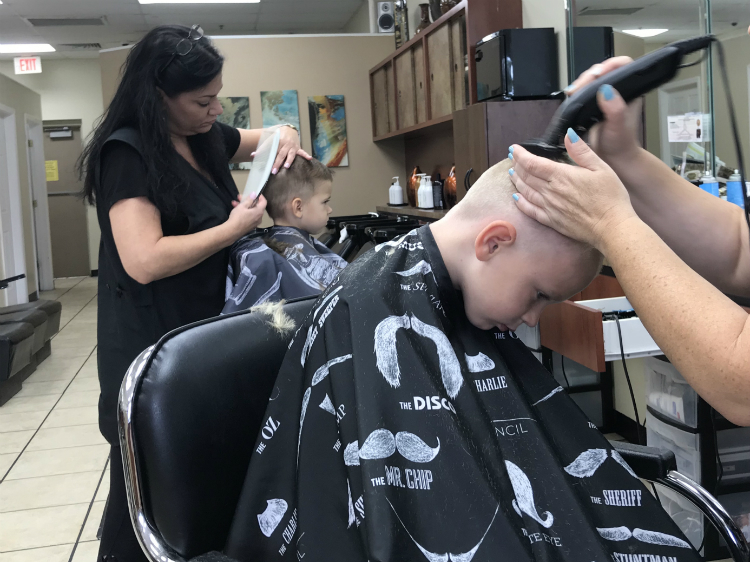 After nine years of parenthood, I thought I had escaped one of the classic parenting disasters: the impromptu hair stylist. And then it happened. We had a very bad hair day.

My kids were playing together quietly, which in retrospect should have made me suspicious. But I sat in ignorant bliss until my 6yo son ran up to me and said, “Look at me! I’m looking sharp!”

I didn’t know what he was talking about, so I played along. “Yeah, you look great.” Then I noticed something different about his hair. At first, it looked like his hair had been slicked back with gel or something. But it was much worse.

Upon closer inspection, I saw my son’s hairline was about two inches farther back on his head than usual. The back of his hair was chopped up and he had big gaps of hair missing on the top of his head. When I raised my jaw back up to its normal position and asked him what happened, he proudly said his sister cut his hair for him. 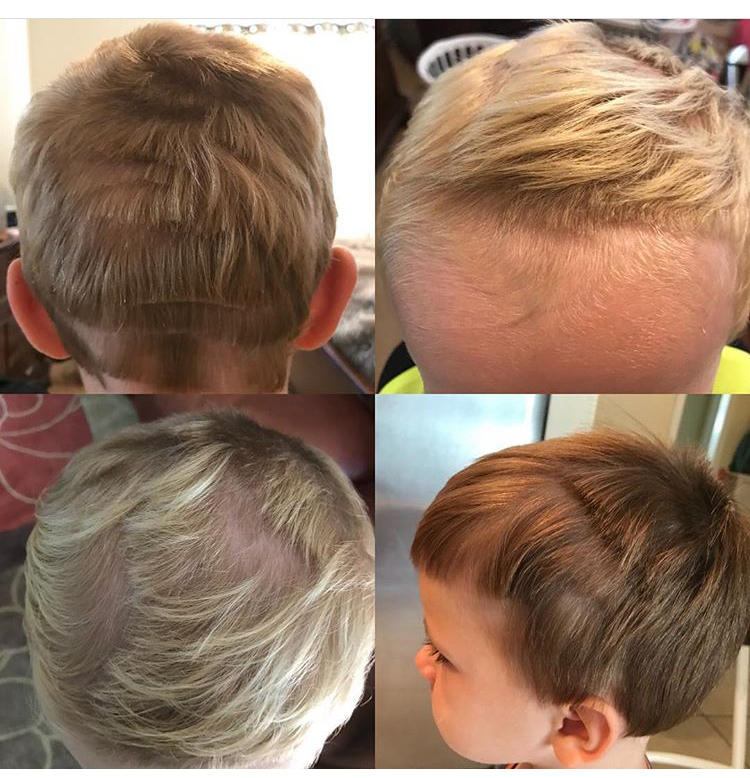 I often tell my kids that they don’t look as ridiculous as they sometimes do, but there was no sparing feelings this time. I had to tell him, “You don’t look as sharp as you think you do.”

My 6yo’s hairchop was too thorough to have been self-inflicted. So, I walked straight to my 9yo daughter’s room to find out what happened. Nonchalantly, she said the boys asked her to cut their hair.

Two things came to mind: 1.) Be careful what you ask my daughter to do. She’s like a genie who makes you regret your wish’s lack of specificity. 2.) My 4yo must be somewhere looking like he was attacked by Edward Scissorhands’ evil twin too.

When I found our 4yo, he was walking around like nothing had happened. He couldn’t see the array of divots in his hair, so what did he care? Regardless, I had to express my disappointment to my daughter. But I was holding back a smile while I did it. Everything was so bad it was impossible not to laugh.

Before I could think about what to do about the boys’ hair or how to tell my wife what happened, I needed to find where the incident happened. It was wishful thinking to believe anybody had cleaned up the mess, which meant there was a lot of hair somewhere.

Sensing it was in her best interested to be nice, my daughter led me to the scene of the hairchop: my 6yo’s bedroom closet. As expected, clumps of hair were on the floor. The scissors were still laying there – and they weren’t safety scissors. They were the real thing, which made me thankful all we needed was a hair stylist to fix the problem as opposed to a doctor at the hospital. 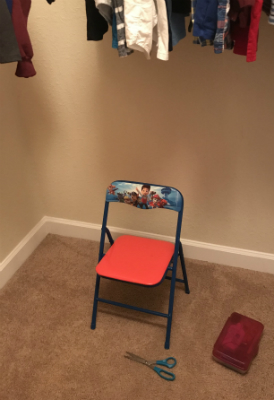 It was tempting to make my boys go a few days with their hairchop to make them learn a lesson, but it would be too cruel. Plus, they would probably enjoy the attention and it might encourage them to do it again. So I herded them into the van and we left for the hair salon.

For the second time of the day, my boys got a haircut. The stylist knew there was no saving my 6yo’s hair. She had to buzz his whole head. My 4yo was spared a buzzcut, but the not from the evidence of what happened. A few divots still remained. The stylist who cut his hair asked us not to tell anybody where he had his hair cut so people didn’t think it was her fault.

My 6yo was very self-conscious about his new look. As you might expect, the timing couldn’t be worse. It happened less than a week before the first day of school. I had to reassure him he looked “great” with an ongoing stream of compliments. Still, he kept asking me if he was going to be bald forever.

After a few days, it was clear my reassurances were effective. My 6yo started asking for another buzzcut once his hair grows back. I told him we could talk about it next summer, to which he responded that he could have his sister cut it again. Just when I think he’s learned his lesson, he makes me doubtful. Such is parenthood.

Apparently, every kid is involved in a haircut disaster at some point. When I shared pictures on Facebook of what happened in our house, my page exploded with comments. Dozens of people confessed to their own crimes against hair when they were children while others shared eyewitness accounts. Three national websites saw our pictures and wrote articles about it:

As it turns out, I couldn’t escape this inevitable milestone of parenthood. It was just a matter of time. If you think an unplanned haircut isn’t going to happen in your house, it’s just wishful thinking. On the bright side, it’s too funny to get too upset about. 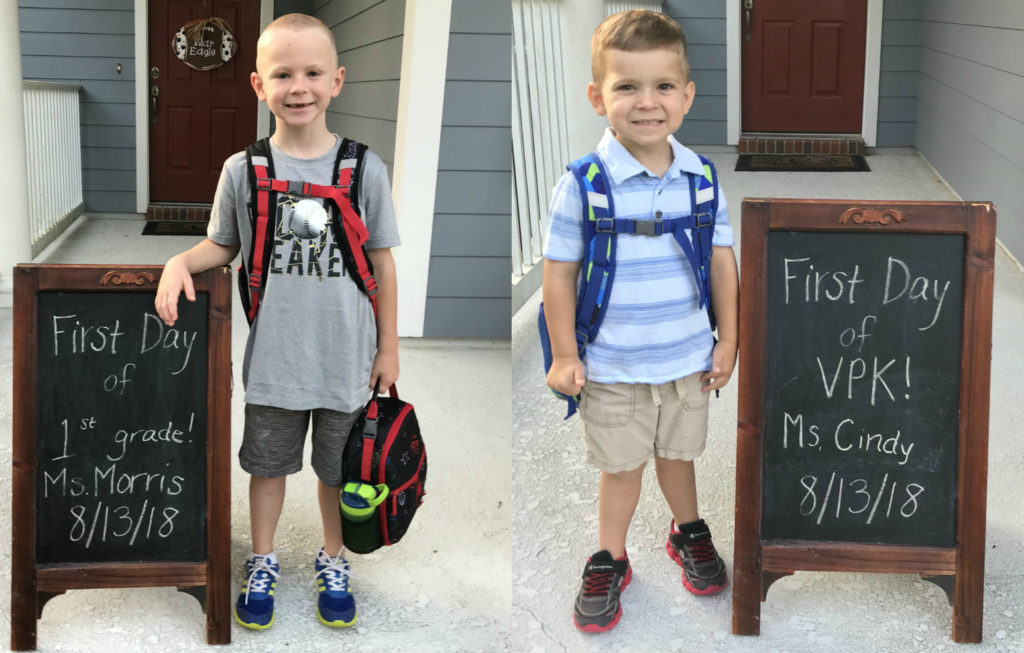 The Kragle, in case you’re the one person who hasn’t seen The Lego Movie, is the “superweapon” that evil villain Lord Business uses to try to freeze the world into “perfection.” In the end, (spoiler alert) the Kragle is revealed to be Krazy Glue and the hero caps the bottle/weapon so the world isn’t frozen into place and new designs can be created.

The first 50 times my kids watched this movie, I had no problem thinking that gluing Legos was evil. But sometime after my youngest child turned three and became OBSESSED with Legos, I had a change of heart.

My son loves Legos so much it’s only a matter of days, sometimes minutes, before he breaks them. I don’t blame him. Sometimes Lego Batman’s car needs to be smashed into Lego Darth Vader’s tie fighter to save the world. But I’ve found that to save my sanity, sometimes you need to glue Legos together with “The Kragle” so they don’t break so easily.