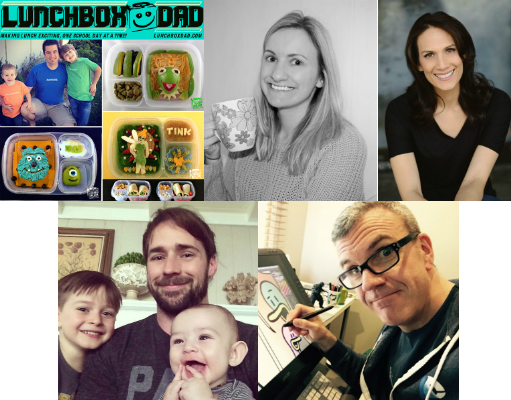 Beau Coffron from episode 23: Beau is known as Lunchbox Dad. He’s appeared on Good Morning America, The Steve Harvey Show and several other top shows. He’s also appeared on ABCNews.com, Yahoo.com and he’s even been in People Magazine, all because he makes the most creative lunches for his kids.

Sarah Turner from episode 25: Sarah is best known to her fans as the Unmumsy Mum. She recently released a book called The Unmumsy Mum, which is already a Sunday Times bestseller in England. The book has its roots in her very popular parenting blog of the same name – The Unmumsy Mum – which was named Best Baby Blog at the 2015 MAD Blog Awards.

Bianca Jamotte from episode 26: Bianca is a mom, an actress and the creator of the webseries Real Mommy Confessions. If that wasn’t enough, she also owns a specialty mac and cheese restaurant and a coffee shop in Brooklyn, New York.

Charlie Capen from episode 28: Charlie is the co-creator of the How to Be a Dad website and co-author of The Guide to Baby Sleep Positions: Survival Tips for Co-Sleeping Parents.

Brian Gordon from episode 29: Brian is the creator of the Fowl Language webcomic. He has a new book out titled Fowl Language: Welcome to Parenting, which is full of cartoons that perfectly poke fun at the daily struggles parents face.

Share Your Parenting Fail on the ParentNormal Comedy Podcast

I’m gathering the stories of parenting fails from listeners to share in future episodes. If you have a parenting fail to share, check out how easy it is to share your story on the show.