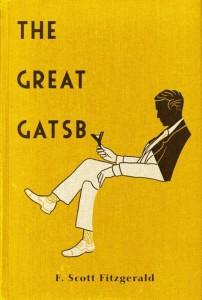 Nick, we mostly know you from your time spent with Jay Gatsby in West Egg, but few people are aware of your life after West Egg as a family man with four young kids in the Midwest. How would you describe your life now as a parent?

There are only the pursued, the pursuing, the busy and the tired.

It sounds like you have your hands full. Do you ever feel like being a parent is too much to handle?

The loneliest moment in someone’s life is when they are watching their whole world fall apart, and all they can do is stare blankly.

By the sound of it, you must be dealing with a house full of sick kids.

Do you find that some of your children can be more difficult than others?

A sense of the fundamental decencies is parceled out unequally at birth.

How do you handle a situation when one child isn’t finding as much success as another? What do you say to him or her?

It eluded us then, but that’s no matter — tomorrow we will run faster, stretch out our arms farther.

Despite the tough times, particularly during the terrible twos and threes, we love our kids. What do you like most about your toddlers?

An extraordinary gift for hope, a romantic readiness such as I have never found in any other person and which it is not likely I shall ever find again.

Are you ever tempted to watch other parents and write your observations of their lives like you did with Gatsby?

In my younger and more vulnerable years my father gave me some advice that I’ve been turning over in my mind ever since. “Whenever you feel like criticizing any one,” he told me, “just remember that all the people in this world haven’t had the advantages that you’ve had.”

Good advice. No parent is perfect. What is your philosophy on recognizing you are going to repeat mistakes sometimes?

So we beat on, boats against the current, borne back ceaselessly into the past.

What do you say to new parents who are often unfairly criticized by people who have never had kids or can’t remember what it’s like to raise babies and toddlers?

They’re a rotten crowd. You’re worth the whole damn bunch put together.

Well, our readers appreciate you taking the time to talk to us and your honesty about parenting.

Every one suspects himself of at least one of the cardinal virtues, and this is mine: I am one of the few honest people that I have ever known.